The Balboa Art Conservation Center (BACC) provides conservation and preservation services for cultural institutions, private collectors, and the general public for their works of art, cultural objects, and historic artifacts.

In accordance with the American Institute of Conservation's Code of Ethics and Guidelines for Practice, BACC’s graduate school-trained conservators offer a rigorous and scientific approach to the preservation, examination, and treatment of cultural heritage objects.
​ 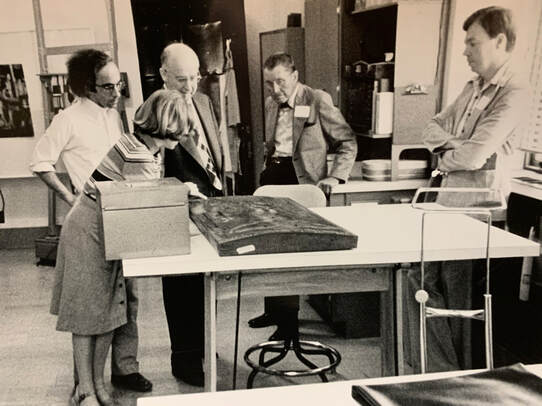 The first director of BACC, Richard Buck (third from left) and a pioneer in the field of art conservation, George Stout (second from left) with colleagues at BACC, 1973.
​BACC owes its existence to the meeting of two minds—Henry Gardiner and George Stout. Gardiner, who served as director of the San Diego Museum of Art from 1969 to 1979, guided the institution through a period of significant expansion of the collections. Stout (1897–1978) was a pioneer in the field of conservation in the United States, particularly in his application of scientific techniques to art restoration.  In 1973, Stout was appointed visiting director of the Timken Art Gallery (now the Timken Museum of Art), with a clear mandate to focus his attentions upon conservation issues.

During the 1970s, the San Diego Museum of Art (SDMA) underwent a period of reassessment of collections in response to the significant growth of its holdings over the previous decades. Like other museums across the United States, SDMA was becoming increasingly aware of conservation needs and the reality that these needs were not being met. Only the largest American museums boasted sufficient conservation resources. In response to this situation, the National Conservation Advisory Council (NCAC), charged with assessing the nation’s conservation needs and formulating solutions, was established in 1973.

In November 1973, Gardiner, increasingly concerned about SDMA’s expanding needs, sought the counsel of Stout, who was in residence at the Timken. Stout was well aware that cooperative conservation centers were being formed in the United States to meet regional needs. Together, Gardiner and Stout developed a plan to establish a conservation center in San Diego that would deliver a range of high-quality, cost-effective conservation treatment, consulting, and education programs to SDMA, the Timken, and a future consortium of museums.

High on their priority list was the hiring of Richard Buck in 1974 to direct the center. An important leader in the field of conservation, Buck was experienced in establishing regional centers. With Buck’s arrival in San Diego, the Balboa Conservation Center became a reality, with operations located in facilities provided by SDMA. In March 1975 the center was incorporated as a private, nonprofit organization and renamed the Balboa Art Conservation Center. Six years later, BACC moved into its own home in Balboa Park’s Casa de Balboa.

Watch this video from the "Balboa Park 2 You" series to learn a few fun facts about the Balboa Art Conservation Center.
CONTACT | SUBSCRIBE | DONATE
​