ENamored with Ancient Art, Scholar Discovers a Good Conservator is Worth Their Weight in Gold 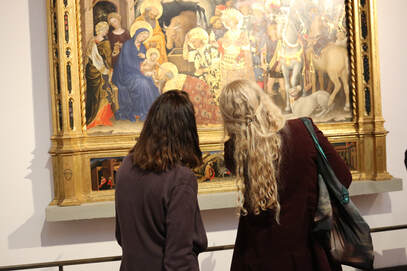 Katherine Schimmel (on right) and her sister take in a painting at the Uffizi Gallery/Gallerie degli Uffizi in Florence, Italy.
As a graduate student I was very fortunate to be mentored by C.C. Lamberg-Karlovsky, a pioneer in the field of ancient Mesopotamia and former director of the Peabody Museum at Harvard. His breadth of knowledge was astounding and his teaching style legendary. He could breathe life into ancient subjects in a way that would stay with you long after the bell rang and the class ended.

One day, after teaching us the recipe for Sumerian beer (which tastes terrible by the way), I remember him telling the class about these ancient wall portraits that had recently been discovered. They might have even been Natufian, a culture that existed in the Levant from some 12,000 years ago. In any case, at some point he produced images of the portraits and I knew at once that that was it for me. I was completely enraptured because not only were they extraordinarily old, but they were also extraordinary portraits. I couldn’t stop thinking about them. In a way, they haunted me because they showed me visually how progress is not always measured by the passing of centuries.  I learned much about the power and universality of art from this, but also about the importance of preserving it for future generations.

Years later, I had a similar, almost visceral reaction to Italian portrait paintings from the 1400-1600s in that I couldn’t get them out of my head. The obvious solution to this problem was to devote time to research in this area and in particular, to the study of the materials and techniques used by renaissance artists, which I found to be incredibly rich. This landed me in Florence, Italy, and allowed me to be able work on some pretty amazing research projects and learn from people who were highly gifted.

BACC’s Important Role in Research
The technical imaging and analytical expertise that the Balboa Art Conservation Center provides has been an essential first step in the realization of certain projects for me.

For instance, while it has been enormously helpful with respect to understanding specific aspects of my own personal collection of art, I have also utilized the center’s imaging capabilities (X-radiograph, infrared reflectography) and the input from conservators as a springboard to projects that were later completed in Italy.

Along the way I discovered that a good conservator is worth their weight in gold because they live in a particular space and so naturally see things from a different perspective. There is tremendous value in this. Not only are they used to evaluating the material condition of objects (which is a complex process), but they also know how to intervene (if necessary) in a non-invasive and reversible way.

Their work forms an essential leg of the material analysis /cultural preservation table and for this reason, I strongly believe that conservators should be the first professionals to consult with before any future treatments or investigations ensue. This includes more sophisticated imaging diagnostics and in-depth chemical and microscopic analysis.  ​
Katherine Schimmel's painting of Saint Catherine (by an unknown artist, ca. 16th century) is shown here in normal light, as an X-radiograph, and as an infrared reflectogram composite of the painting. BACC's Chief Conservator of Paintings, Alexis Miller, shares what these examination techniques reveal:

"These imaging techniques were used to examine the painting for both condition issues and construction clues. With Old Master paintings it's common to find that the original canvas has been lined to another canvas in a past intervention, so an x-radiograph of the painting can show the weave of the original canvas and whether or not there are any old repaired tears or losses. Since x-radiographs show the varying densities of the materials used in the painting, later restorations often look different. You can see in the second image that there is a white area near the Saint's ear -- this is an area of paint loss that was filled with dense fill material in a past restoration. In general, the canvas is in very good condition. The infrared reflectogram shows us a few areas of touch up restoration on top of the varnish; these look like dark lines in the lower right part of the painting. Conservators and scholars often look to infrared reflectography to discover underdrawing by the artist, but in this case, the artist did not use a traditional underdrawing and likely directly added paint on the ground layer as they painted."
Why I Decided to Support BACC
BACC provides an invaluable service for both institutions and individuals in the San Deigo region. They have an outstanding, hard working team that is highly skilled and more than capable. However, as a non-profit, the organization will always be dependent on both the public and private sectors in order to fully fund its mission. Given the importance of both safeguarding and understanding cultural heritage within our world, donating to BACC seemed an obvious choice for me.

Why a Recurring Donation?
I think there is an intrinsic power to a recurring donation that is unique and differs markedly from the one-time donation model. This is because it allows the donor to spread her/his gift across time in a way that is most comfortable, and at the same time, it also gives the recipient access to a continuous stream of funds throughout the year. This can become a powerful tool, especially en masse when multiple donors sign on.

A Little Goes a Long Way
Finally, I would say that perhaps the most important thing to remember is that even a small donation can go a very long way. Not everyone can be as philanthropic as Eli and Edythe Broad in Los Angeles or the Jacobs family in San Diego, but nonetheless we can consciously choose to make a difference in the things that matter most to us. ​
Join Katherine in supporting BACC’s important work and set up a recurring gift here.
CONTACT | SUBSCRIBE | DONATE
​